Cobwebs in the Creative Attic

Egads, has it been a month since the last post?!  My apologies, dear readers.  I'd like to claim that I have been busy traveling to faraway exotic lands, or composing a opera or something, but the truth is that, were I to actually pass through an airport scanner, the results would look something like this: 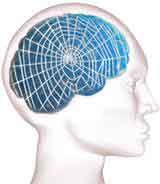 This would probably be curiously described in some dust-collecting psychiatric text as something like "Unequivocal Sentient Dormancy", or "Complete Hibernation of Imaginative Oomph".  A definitive understanding of this creative malaise was proving elusive, until I stumbled upon something eye-opening while perusing one of my favorite time-sucking websites: 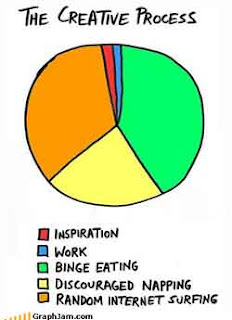 This particular bit of graphic hilarity was posted by 'catfacemeowmers', and I was obviously immersed in the orange area when I discovered it.  I have no idea who this person is, but the above chart seemed to provide surprising and unnerving proof that they had somehow peered into my very soul, or at least ruffled through the pages of my psyche.  I have been haplessly over-indulging on the large pieces of the pie chart, whilst ignoring the tastier smaller slices.

Well, there's no better kick in the cobwebbed creativity than a good art challenge.

Some of the artists on Daily Paintworks are now posting challenges, and Carol Marine's One Color Per Stroke caught my eye.  Since my Imagination had been under official Couch Potato status for the past month, a warm up with a familiar subject seemed in order. 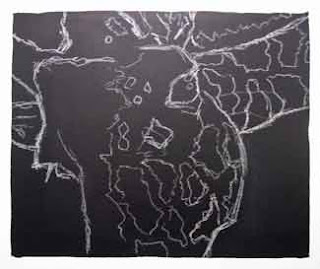 Yep, my old friend has resurfaced to help lift the malaise.  She was sketched on black gessoed paper using a white Conte pencil. 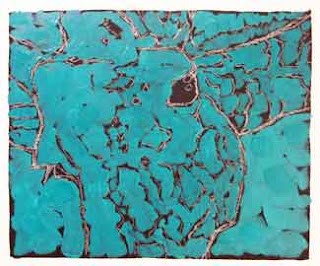 Since the color scheme will be predominantly warm, a cool turquoise underpainting was used. 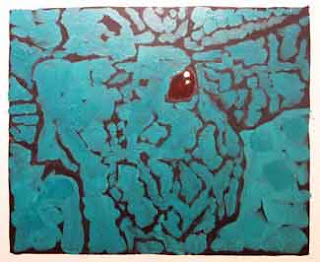 When the underpainting was dry, the white pencil was wiped away, and the eye was defined. 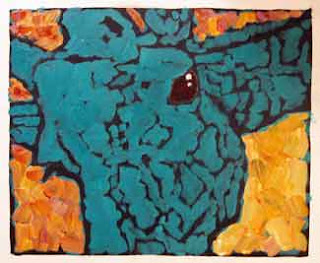 The background was first, with each brush load of paint being modified slightly to adhere to the tenets of the challenge. 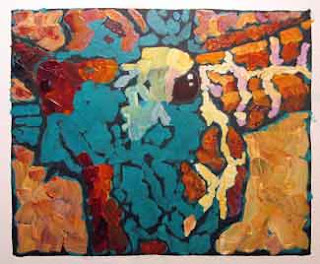 Then it was time to start defining her face.  Not falling back into the 'dabbling" habit was proving to be a struggle. 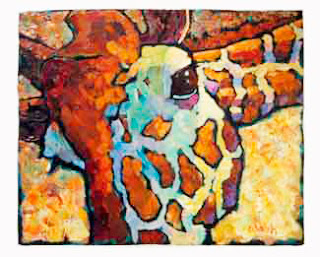 'Wassup?'
7"x8.5", acrylic on paper
©2011 Lisa Walsh
The brush strokes didn't turn out as defined as I would have liked, but simpler subject and a larger brush would most likely enhance that effect.  It did feel good to clear out the cobwebs and brush some thick paint onto paper.
Now it's time for a snack.  Followed by a nap.

Ha you are too funny! Great post and I love the painting!

Hey there Barb! Thanks for stopping in, always good to hear from you.

I love this painting Lisa. Your colors and brushstrokes are wonderful.

Good job (as usual!) Don't think a trip through the scanner would even show cobwebs inside my empty head - just some large air bubbles! Very cute post.

ahhh..internet surfing....it's so easy to lose an hour in what seems like 5 minutes...especially when there is soooo much eye-candy to be found visiting other artist's blogs, including yours...love this giraffe!

Not air bubbles, Deb...those are all of your wonderful artistic ideas just waiting to be popped. :-)

Hi Jenna, how's things going? Yep, I'm an art blog stalker too. I know it takes up a lot of time, but I sooooo can't help myself. :-P

Here by way of my dear darlin' Murre, who occasionally points me in the right direction, and I'm pretty sure we're all three related somehow, judging by the pie chart (Discouraged Napping has a familiar ring to it...)

Just wanted to say I'm glad to know you're out here making painting a little less terrifying for all of us. I'm on painting #146 of 148 total for my next book, and I'm happy to report that my elaborate Art Avoidance Behavior has quelled slightly, probably just through repetition. Now I'm afraid I'll actually finish it, because, uh, then what?

Blogging means never having to say you're sorry. Really. This stuff is free, after all, and life, death and Christmas can really get in the way. Keep up the good struggle!

Thanks for stopping in, Julie. Nice to meetcha! Dear Murr pointed me in your direction a while ago, I have been silently stalking the escapades of you and your brood for awhile now. I'm an avid reader, but a lousy commenter.

I have no doubt that you, I, and Murr share at least a strand or two of DNA, and would get along famously if the three of us ever wound up in the same location at the same time. I think we should plan on that, although it might be a sign of the apocalypse or something. :-)

Congrats on being down to the last two paintings for your book. What next? Well, another book of course!

That pie chart is dead on! I must share it. But first I need to peruse your blog some more! (I came here from Murr Brewster.)

Hi Andrea, and welcome! Murr sends some wonderful folks my way. Thanks for stoppin' by while strollin' through the interwebs. It was nice to hear from you, and hope you enjoy the blog.

Sorry you're stopped up. I was too till yesterday when I read an interview with Sharmon Davidson (True Adventures of An Art Addict) on Shawn Daniell's Art Seen blog. Her words pushed me back to the studio--not because they were so brilliant, but because I was ready to go. I had had enough of being stopped up and frozen by some painted canvases that could be sent through a wood chipper if I was so inclined. I hope you're not through with art or blogging. Your wild life paintings were enjoyable.

Hi Linda, thanks oodles for the words of encouragement. Actually I'm not totally blocked, it's just been a major change in work schedule, and several mega-projects around the home. I feel guilty sitting down, doing art, and enjoying myself when chaos reigns all around me. Thanks again for the support, I should be back before long.

I stumbled here from Murrmurrs place and your art caught my eye but your words are really sticking with me. I too am caught between menopause and senility and wondering what next. I hope your creativity is intact and you are keeping senility at bay.
Nice to meet you, belatedly.

Lisa Walsh
Hi, and thanks for stopping in. I have dabbled in art on and off since childhood, having occasional spasms of Artistic Inspiration, then letting it slip quietly back into dormancy. Now floating in the abyss between menopause and senility, I decided I finally needed to completely awaken my Hibernating Artist Within. This blog is a chronicle of this artistic evolution as I attempt to get back to the basics, sharpen my skills, define my style and learn to loosen up. All in between hot flashes.

Have Posts Sent To Your Email

To Net, for all of the unfailing love and support, no matter what harebrained, Ralph Kramden-ish scheme I come up with.